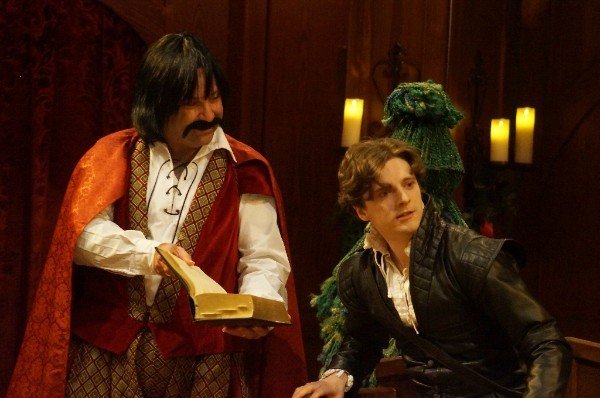 Was William Shakespeare guilty of plagiarism and allowing a female actor to perform on stage in violation of England’s laws? Those were the questions for the “jury” in the 10th Annual John R. Hamilton Mock Trial, an event that supports the Orlando Shakespeare Theater in Partnership with UCF. This year’s trial featured cast members from the theater’s productions of Shakespeare in Love and Twelfth Night. Attorney Nick Shannin (Shannin Law Firm, P.A.) represented the Queen, and Attorney Kim Ashby (Foley & Lardner LLP) represented the defendant.

The Crown’s star witness was Kit Marlowe, portrayed by Thomas Leverton, who delighted the audience with his quick wit. Nick led Kit through the questioning, revealing a strong resemblance between lines in Shakespeare’s works and some earlier works of Marlowe’s. The audience also saw the witness Thomas Kent/Viola, played by Susan Maris, break down under Nick’s brutal cross-examination. In the end, however, the Queen pardoned our beloved Shakespeare, and a good time was had by all.

This year was Nick’s fourth appearance as an advocate in the annual event, which raised over $12,500 for the Orlando Shakespeare Theater. Information about the theater and its upcoming 30th season is available at orlandoshakes.org.